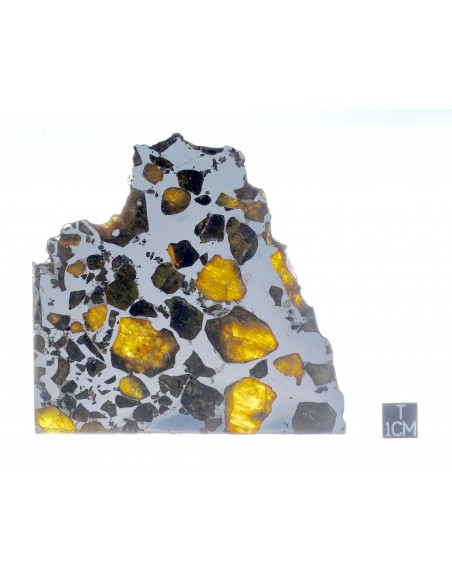 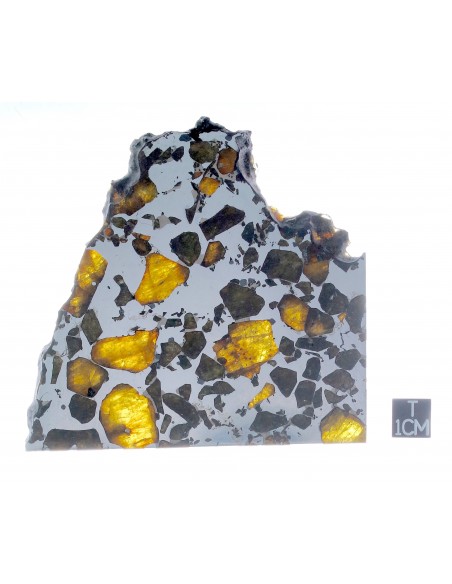 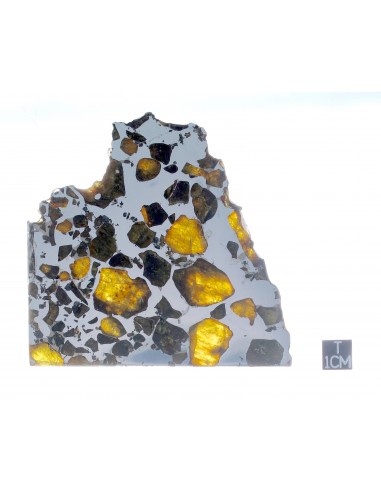 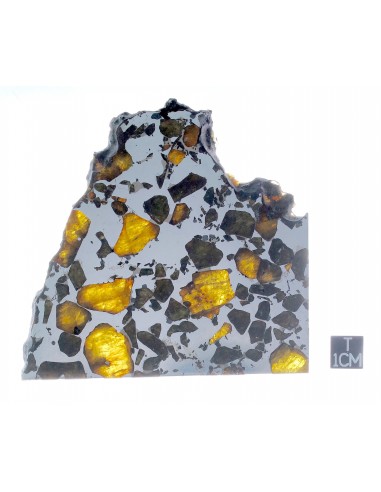 General: The meteorites of this group are named for the German naturalist Peter Simon Pallas. In the late 18th century, he was invited by the Russian emperor, Catharina the Great, to explore the vast areas of Siberia. In 1772 during one of his travels, he studied a large iron mass that had earlier been found in the mountains near Krasnojarsk. This unusual mass contained large olivine crystals set in an iron matrix, strange enough to catch Peter Pallas’ attention. He thoroughly described the unusual find in one of his reports, not knowing that it was a genuine rock from space. Some decades later, in the early days of meteoritics, it became obvious that Pallas had discovered a new type of meteorite. Thereafter, all similar stony-irons were named for him, and the type specimen of the pallasite group, Krasnojarsk, became known as the “Pallas Iron”.

Description: Modern meteoriticists use the term “pallasite” to describe a certain structural class of stony-iron meteorites that contains abundant silicate inclusions in a nickel-iron matrix. Usually, the silicates are large olivine crystals, often of gem quality. These peridots make the pallasites some of the most attractive meteorites known, and cut and polished pallasite slices are highly coveted among meteorite collectors. Sometimes pallasites and pallasitic peridots are used in jewelry, making them the only genuine cosmic gemstones on Earth.

Based on their origin and formation history, the pallasites are regarded as samples of core/mantle boundary material from differentiated asteroids, inferring that a close relationship exists to the iron meteorites. Upon etching, larger metal portions of polished slices display typical Widmanstätten figures. In addition to this, pallasites display chemical, elemental, and isotopic trends that link them to specific chemical groups of iron meteorites, linking their origin to a common parent body. Hence, they are classified into three distinct groups or grouplets, similar to the chemical groups of the iron meteorites: the main group pallasites (MGP), the Eagle Station grouplet (ESP), and the pyroxene grouplet (PXP).

Mineralogy: MGPs contain varying amounts of magnesium-rich olivine crystals set in a nickel-iron matrix, usually displaying an olivine-to-metal volume ratio of about 2 to 1. The olivine crystals have typical diameters of 0.5 to 2 cm, and the nickel-iron matrix displays medium Widmanstätten figures upon etching. Boundary regions between metal and olivine often contain accessory minerals such as troilite, schreibersite, and chromite.

Formation history & Origin: The elemental and oxygen isotopic compositions of the nickel-iron metal are similar to the values determined for group IIIAB irons, suggesting a common parent body for both groups. Both probably formed on the same parent body, a differentiated asteroid that was disrupted by a single impact event. The IIIAB iron meteorites represent fragments of the core, while the MGPs represent samples of the core/mantle boundary of this common parent body.

Members: Comprising about 42 members, the main group pallasites represent the most abundant class. Famous main group pallasites include Krasnojarsk, Brenham, Brahin, Imilac, and Esquel. The main group also comprises the only three witnessed pallasite falls, one of which is the renowned and visually attractive Marjalahti, a meteorite that fell in the Karelian Republic, Russia, in 1902. Copyright@Luc Labenne

Labenne Meteorites is a private organization specialized in finding and supplying meteorites to institutions and private collectors.

Every year since the 1970s, governments have sponsored expeditions to retrieve meteorites in Antarctica. However, it has only been since the 1990s that warm deserts like the Sahara have revealed their remarkable discovery potential. Our numerous finds are certainly witness to this fact. Through systematic and dedicated searching, we have found thousands of meteorites – many of which have attracted serious scientific interest.

In addition to the Lunar and Martian specimens from various space exploration missions, Lunar and Martian meteorites arrive on Earth from unexplored, uncharted regions of the Moon and Mars, and inspire extensive research.

Interest in such exceptional meteorites is on the rise in both the scientific community and the general public, as fascination for all things related to Space, particularly Mars and the Moon, goes sky-high.

Over the last eight years, we’ve organized expeditions to find and collect new meteorites in the warm deserts of the world, primarily the Sahara and Oman. Our expeditions have led us to discover several thousand new meteorites, known by the names Sahara and Dhofar. They have been the object of extensive scientific research in the world’s largest universities, research institutes and museums in Europe, the United States and Japan. Our finds are exhibited in the most prestigious collections in the world – the Natural History Museum in London, the Museum National d'Histoire Naturelle in Paris, Das Naturhistorische Museum Wien in Vienna, Museum Für Naturkunde in Berlin, American Museum of National History in New York, Chicago Field Museum in Chicago.

We are members of the Meteoritical Society, the official organization governing the classification and reference of new meteorites affiliated with the Department of Chemistry and Biochemistry of the University of Arkansas, in the United States. The Meteoritical Society is also responsible for the scientific journal Meteoritics and Planetary Science, entirely devoted to meteorite research.